Following Adriaen is an interview series with Dutch entrepreneurs about their company’s international expansion into the United States. 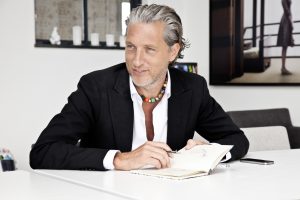 Marcel Wanders at his Amsterdam studio

Marcel Wanders is regarded by many as an anomaly in the world of design. Wanders owns a leading product and interior design studio located in the creative capital of Amsterdam. His firm is responsible for over 1,900 iconic product and interior design experiences all around the globe including premium brands. Under Marcel Wanders’ creative leadership and direction, and with the support of Gabriele Chiave as creative director since 2014, Marcel’s studio employs around 52 international design and communications experts. Marcel Wanders is also co-founder and art director of MOOOI, a successful design label with presence in 79 countries.

Your mission is to “create an environment of love, live with passion and make our most exciting dreams come true”. Your career launched with the knotted chair, and now you are designing the interior of private residences and hotels like Andaz Amsterdam and Mondrian Doha. Do you believe that to become an internationally well-known, successful designer you need to be a successful entrepreneur?
No, that’s not necessary, though it helps. When you understand business, and you understand the challenges your customer is facing you can help find a solution by a design. It should always be that good that I would buy it myself. Having said that, being a successful entrepreneur helps, as it enables me to take on projects that otherwise would not be possible, for instance the Andaz Amsterdam hotel (note: co-owned by Marcel).

Besides the Marcel Wanders Studio, you cofounded the design label MOOOI in 2001. In 2015 you opened MOOOI Showroom & Brand Store in New York City. What inspired you to cross the Atlantic, and why did you select the United States for your company’s initial international expansion?
In 2002, we already started opening the US market with an agent and with steady growth over the years came the need to control our go-to market. So, we incorporated in 2010, hired our own staff and became even more active in the local market, with great success. Our annual year-on-year growth allowed us to open our own showroom in NoMad in 2015, something that I’m still thrilled about.

Following Amsterdam and New York, you’ve opened Brand Stores in Tokyo and recently London, as part of your global growth strategy. Do you still envision growth in the US by opening a Brand Store on the West Coast?
Our growth strategy is based on several indicators, and while we’re still a small company we need controlled growth. We take our time and look at 4 to 5 global locations simultaneously. We aim to open 1 to 2 stores annually. As for the US, both Miami and LA are in our top 20. For now, in September/October we’re opening our Stockholm location; we go step by step.
Opening a new showroom is a process. It’s about structure. It’s the right culture. It’s the need to have a better understanding of the local market, and once you understand it you need to react accordingly, attract the right staff, but remain true to your yourself even though you must adjust to and respect the local market. 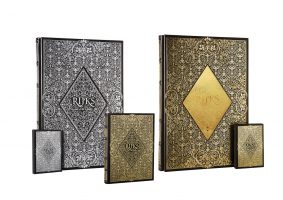 Another recent design project is the launch of a book about the Dutch Golden Age paintings in the Gallery of Honour of the Rijksmuseum in Amsterdam. What was your motivation behind it?
We still live an era of Modernism, a movement in which the past is irrelevant when you design the future. However, nothing gets older quicker than the new– so you really need to make things that are not so new, something we’ve done in the past twenty-five years. Having said that, I enjoy (together with the people at my studio) showing, in a different way, the value of our culture. That’s why I wanted to create a book about the Rijkmuseum’s Gallery of Honour with the best paintings ever made in the Netherlands in the 17th century, and have 30 leading experts from various fields contribute with their thoughts on these paintings.

What makes the book special, and what I consider a personal achievement, is size. An art book never shows the exact painting in its real size, which is quite strange. This book shows the paintings on a 1:1 scale, showing their real-life size, which makes it extraordinary.

Can you describe this impressive publication, what is it about, and what was the biggest challenge in creating it?
I never made a book. It took a long time to create this book, and overtime it became a better book. We had the paper made for it specifically. Not one page shows white, we had 250 walls in Amsterdam photographed and used as background. We shot all 60 paintings with the newest technology. The book is bound by the Vatican’s binders, all text is hand-calligraphed, and more. We’ve worked hard for 4 years…it has become a piece of art.

This publication has been showcased in New York twice already. What do you aim to achieve by bringing this project to the US?
I believe this book helps Dutch people, Dutch businesses in the US, make a statement about who we are and what we stand for. 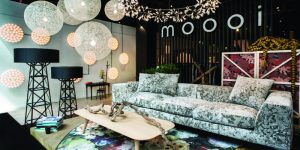 What are your priorities for the United States market and how do you achieve them?
Since the opening of MOOOI in New York City we’ve demonstrated double digit growth. And if we can continue to maintain that growth while developing our network, I’ll be more than happy. We will open new locations. Next to that, licensing is something we will focus more on. The future is wide open. Our goal every year is to remain open to inspiration. It is the opportunity of what’s next that drives us most.

Adriaen Cornelissen van der Donck (c.1618 – 1655) was a lawyer and landowner in New Netherland. His title “jonkheer” lent its name to city of Yonkers, NY. In addition to being the first lawyer in the Dutch colony, he was a leader in the political life of New Amsterdam (modern New York City). Enchanted by his new homeland of New Netherland, Van der Donck made detailed accounts of the land, vegetation, animals, waterways, topography, and climate. He used this knowledge to actively promote immigration to the colony, publishing several tracts, including his influential Description of New Netherland.

© 2023 Netherlands Chamber of Commerce in The United States.